Hard Rock Café Is Still Rockin’ at Broadway at the Beach 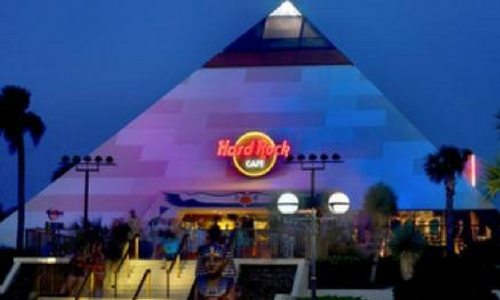 If you are a previous visitor to Myrtle Beach with Paradise Resort, then you have likely seen one of our most recognizable landmarks while passing Broadway at the Beach – the pyramid. That pyramid was home to Hard Rock Cafe from 1995 until recently. In tourism-industry years, that’s quite a long life without a facelift!

When you visit the beach in 2017, you may notice that the pyramid is missing. Don’t worry, we haven’t lost the Hard Rock. As a matter of fact, the restaurant has gotten brand new digs that are even better than its previous home.

Lots of changes are going on at Broadway at the Beach, with the biggest being the move of Hard Rock Cafe from its legendary location at that pyramid. All things change, and change is usually for the better, right? That’s certainly the case here. Since 1995, tourists and locals had been visiting the Hard Rock and nothing much had changed. This year, everything has – and it is spectacular!

You will find the new Hard Rock Cafe a few doors down from the old location, so you won’t have to look too far. You will know you are there when you see the gigantic neon-lit guitar that sits atop the new building – over-the-top decor in true Hard Rock style. The location is perfect, as it’s not far from the old familiar locale, yet it’s more in the thick of things on the corner, giving a great view of Broadway at the Beach and, of course, Broadway’s legendary summer fireworks shows.

The new building offers 15,043 square feet of space, so there is plenty of room for your closest friends and family, and then some. There is an upstairs balcony, which is the area that overlooks Broadway at the Beach and is perfect for people-watching or viewing those fireworks shows. To give you an idea of the interior decor, it is primarily black, dark blue, taupe and red.  It’s really a must see with a fabulous atmosphere! In stark contrast with the brass and light colors of the old pyramid, a brick wall with red velvet curtains frames the new stage perfectly. Locals have given the location, decor and, of course, the food rave reviews!

Part of the draw of Hard Rock Cafe is the memorabilia, of course. Yes, that has been updated, as well. The only two pieces that made the move with the Hard Rock are the Guns N’ Roses drum set and the Vespa from the Who’s “Quadrophenia.” All other pieces you may have been used to seeing at the old location are back in Orlando for safe keeping at Hard Rock’s headquarters. The new memorabilia? Well, you’ll have to make your way over to Broadway at the Beach and see it all for yourself.

There is plenty of room, actually more so than before with 528 seats, so you may not have to wait as long to enjoy that perfect burger the Hard Rock is famous for on your next visit.  The Rock Shop made the move, as well, so if you are searching for the perfect signature Hard Rock Cafe merchandise, it’s here. Available in the shop are T-shirts (which they are also famous for), mugs, pint glasses, pins, hats and more!

Wondering if the food has changed? The Hard Rock Cafe still offers its all-American cuisine. Steaks, the BEST burgers, tempting salads and food like Mom used to make such as pot roast and shrimp and grits are all on the menu. The bar menu is still extensive, as well, so be sure to have a cocktail or two while you walk around and take in the new atmosphere.

Watching the pyramid go was emotional for some Myrtle Beach locals. Once they saw the new version of Hard Rock, though, the excitement came quickly and has been going strong since the restaurant’s re-opening in October of 2016.

This will be one of the summer of 2017’s hot spots for sure, so if you need directions or suggestions, never hesitate to let us know during your stay at Paradise Resort. We are here and always happy to help. Rock on!